A few blog posts ago, I covered how to parallelize Pandas map() and apply(). You can read more about it at http://blog.adeel.io/2016/11/06/parallelize-pandas-map-or-apply/ … Essentially it works by breaking the data into smaller chunks, and using Python’s multiprocessing capabilities you call map() or apply() on the individual chunks of data, in parallel.

This works great, but what if it’s time series data, and part of the data you need to process each record lies in a future record? For example, if you are tracking the change of price from one moment to what it will be in a moment in the future. In this case the approach I laid out about dividing it into chunks will not work, because as you reach the end of a chunk, you will not have the future records to use.

It turns out that there’s a relatively simple way to do this. Essentially you determine how much in the future you need to go, and include those extra records in each chunk (so some records at the edges are duplicated in chunks), and then drop them at the very end.

So let’s say for each record, you also need records from up to 30 seconds in the future, for your calculation. And each record in your data represents 1 second. So essentially you include 30 extra records in each chunk so they are available for the parallel calculations. And then drop them later.

You start by setting up your parallel processor function like so:

What you’ve done is defined an array of a tuple of arguments (parameters) that can are iterated over, to spawn each parallel worker. In the tuple we pass a reference to the Pandas DataFrame, and the data chunk the worker function should work on. Note that the worker function returns that chunk, and concatenates it back into a final DataFrame. After doing is, note the groupby() function that is called, this is where we drop the duplicate records at the edges that were included in each chunk.

Here’s what your worker would do to work on its chunk:

Note this line: split_end = ((num+1)*split_interval)+30. In the chunk you’re working on, you’re including the next 30 records, which in this example represent the next 30 seconds that you need in your calculations.

And finally to tie it together, you do:

In order for a web application to render on a variety of devices (mobile, tablet, laptop, desktop), it needs to be “responsive”. Meaning the same website can have specific rules written into JavaScript, HTML, and CSS to make it adapt to the size of the screen the browser is running on.

In this post I’ll cover how to make something align on the screen according to what device the user is on. For example, on a desktop view, you may have some header text that you want to align right horizontally. But for the same page and header text rendered on a mobile phone, you may decide it looks better center aligned horizontally.

Let’s use the above example, and see how we can accomplish this. First let’s define the following CSS:

We’ve created a CSS class called responsive-text-align. You’ll notice that it has two settings: max-width: 768px and min-width: 768px. This tells your browser which setting to use when the screen size is either lass than 768px, or greater than 768px. If we assume that a standard mobile screen is 768px across, the max-width: 768px setting will get applied to the webpage when it is rendered on a mobile screen.

You’ll also notice that for the two different screen sizes, we specify different text-align properties. This allows the text alignment to be determined dynamically, or rather, “responsively”.

To use this CSS class, here’s what your HTML would look like (using bootstrap):

And voila! The text will start aligning according to the rules for the responsive-text-align CSS class, based on what screen size the webpage is rendered in.

JasperReports is an engine that can allow you to generate reports in HTML, PDF, or many other formats. When I say reports here, I mean reports that are essentially pieces of paper that convey something meant to be reviewed by someone. Invoices, Statements, Forecasts, or anything that needs to be dynamically presented on paper for review is a good candidate.

One positive about JasperReports is that it’s all Java based, and plugs in well into your Java ecosystem. On the other hand, if you’re just now looking for a reporting engine, I may try to dissuade you from using JasperReports. It seems to have become outdated. There have been few updates in the last couple years (if any), and community support seems to be waning (you only find old blog posts, forums threads, etc). And documentation is also a bit lacking. But if you’re already using JasperReports, this post is for you.

It took me a while to figure how to get JasperReports to do certain things, because again the documentation is weak. So I figured I’d share these insights just in case someone else is struggling with the same thing.

And similarly to set the foreground color (text color), set this property for the TextField:

…to a field of your choosing that has the color in it. (Or hard code the color by typing into the value for this property, surrounded by double quotes to specify a constant). 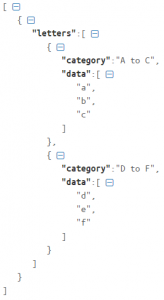 Now let’s say you want to limit your JasperReports Data Set to “letters”, and furthermore a certain category. What you need to do is edit the query for the Data Set, and specify the following: