The default floating point size in Chainer is 32 bit. That means for deep learning, Chainer will expect numpy.float32 for CPU or cupy.float32 for GPU under the hood, and will exit with error if the data is set at a different size.

However, there may be times you want more than 32 bits, such as when you’re getting NaN’s or inf’s in your training routine and want to troubleshoot.

Changing Chainer to use float64 is simple:

Call this at the beginning of your program. And of course, you’ll want to make sure that the ndarray dtype’s for your data are set to float64 (as in np.array(…).astype(np.float64)) before being passed to Chainer. 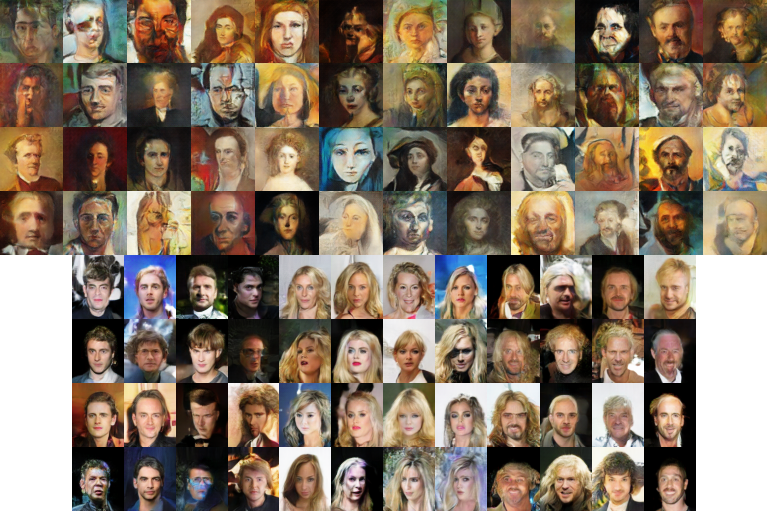 As a 4-month research project for a course at the University of Edinburgh, my group decided to use Generative Adversarial Nets to generate new paintings using the Painter by Numbers dataset. Additionally, we conditioned the paintings, allowing the generation of paintings with certain attributes (such as gender in the case of paintings of portraits). The project turned out to be a big success, and won 2nd place out of 124 other projects in a competition hosted by IBM!

The deep convolutional GAN architecture we chose for the basis of our model enforced a Lipschitz continuity constraint on the spectral norm of the weights for each layer in the discriminator, as proposed by Miyato et al. (2018). This technique, called SN-GAN by the authors, stabilizes the discriminator, allowing the generator to learn the data distribution more optimally.

We built upon the SN-GAN architecture to add conditioning, which involved introducing a one-hot encoded y vector of supervised labels to the generator and discriminator. The y vector provides some information about the image, such as gender in the case of portrait paintings, allowing the generator to get conditioned on the label to generate the class of image specified during test time. Our contribution was a novel model which we called SN-conditional-GAN or SNcGAN, which is illustrated below.

More details can be found in our paper linked above.

After the publication of the paper, we additionally trained a SNcGAN model on the celebA dataset, allowing the generation of conditioned celebrity images.